Atlas Fallen is a new action RPG from the developers of The Surge. This new game has tons of sand based powers and battles.

The sands have many secrets buried beneath, waiting for adventurers to uncover them (just ask the arid deserts of Genshin Impact’s Sumeru region). With this, Deck 13 in collaboration with Focus Entertainment, unveiled a movie trailer for their latest game during Gamescom 2022’s opening night. 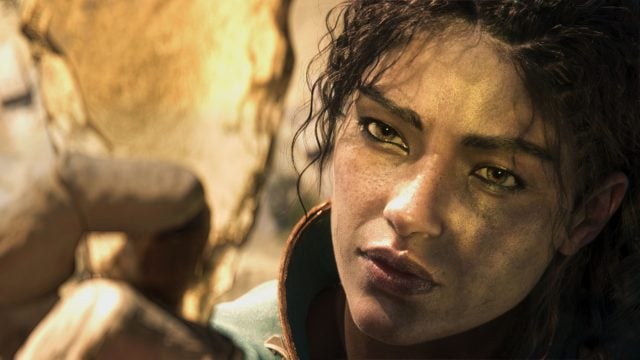 The magical lands like Atlas Fallen are still unnamed at this time. However, these sandy dunes are timeless and still buzz with life despite the dry heat and lurking threats. It is said that the sand contains memories of the past, holding echoes of what was once greatness. 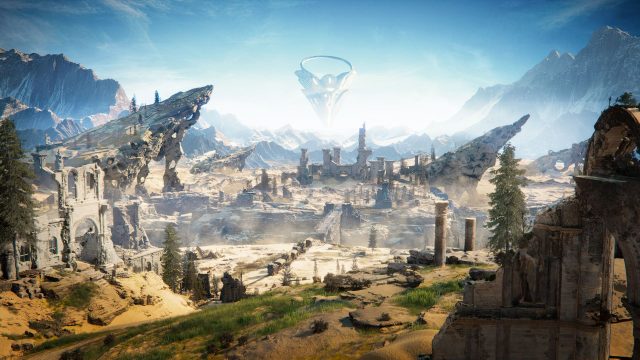 Looming over the horizon

You see, the gods themselves walked the lands of Atlas Fallen, living in peace and harmony with humanity. Indeed, their mutual respect for humanity was so great that mortal heroes are said to have joined these gods. As time went on, this bond weakened as the gods’ vanity grew. Humanity was cast aside as the immortal beings quarreled with each other, resulting in corruption. 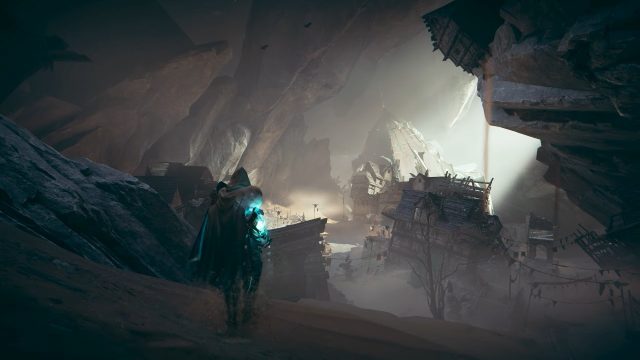 Countless years have passed since this event, and most of humanity has already forgotten its prime. Sand is the only thing that remembers the greatness of the stories that once were. It is only in ruins and old parts of the old world that remember.

There is a lot of sand!

Atlas Fallen’s Gamescom Opening Night trailer featured primarily cinematics with small gameplay bits. While the actual in-game footage was brief, the cinematics themselves revealed much of what we can expect from this upcoming action RPG. 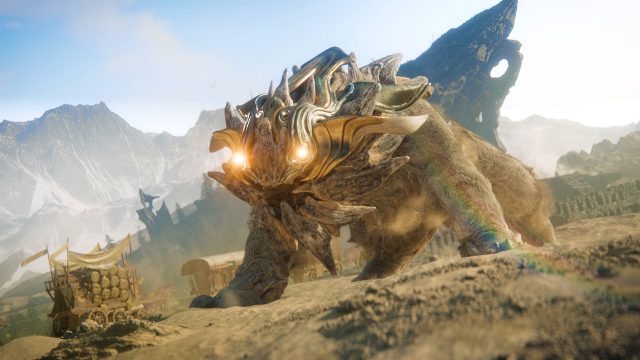 While the world is bathed in sand, the location where the motion picture takes place is not the warmest place on earth. There are still signs of life and vegetation with some patches of grass and trees. It looks more like an ancient European fantasy setting that was trapped in a sandstorm for a few dozen years. A caravan speeds along an ancient highway, eager to reach the majestic city in the distance. To cross, however, they must cross a bridge that has already fallen.

There appear to be two characters available in Atlas Fallen, one male and one female. This gives us the impression that we will either be able to choose between one character to play as the whole game or that certain story segments will give us control over one or the other. 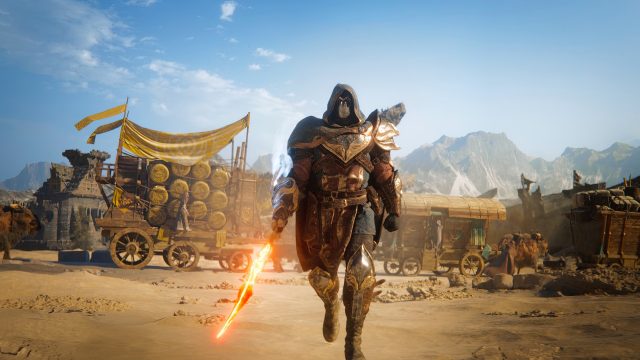 Our armored male character then uses his sand magic to lift the fallen debris and quickly repairs the bridge. However, the effect is temporary as it is still only held together with his magic. It is then unfortunate that the caravan is promptly attacked by a couple of sand animals that look like lions. 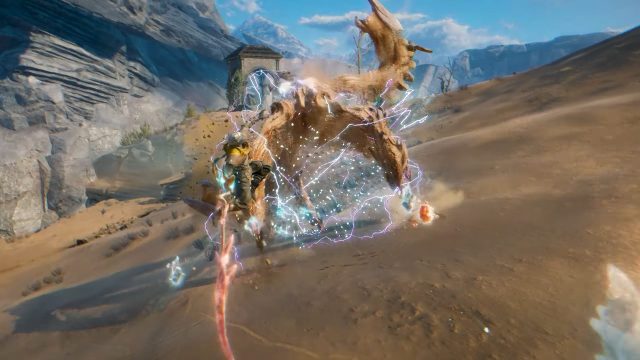 The male prepares for battle by forming a giant sword out of the sand. Our female character watching from a distance then surfs out onto the sand, downhill and ready to support her mate. Apparently, this sandsurfing ability will make up the majority of the game’s traversal systems and will be the primary means of getting around. It is not yet clear if this will be an open world RPG or rather large continuous areas. 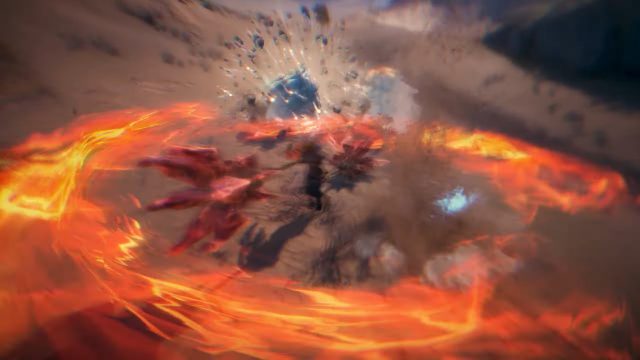 What’s Combat without a little whirlwind

Weapon switching will also be a big feature of the game. As it defies the attack, the male character swipes and slashes with his sword. However, he can also transform his blade into a massive whip, giving him a number of advantages over his enemies. Likewise, the female looks like she can switch her sand-based weapons from an ax to a hammer.

If Deck 13’s experience with The Surge and its sequel is anything to go by, then we can expect Atlas Fallen to have the same electrifying melee. It will be interesting to see how satisfying combat will be as it doesn’t look like strategic division will be a big part of this title. 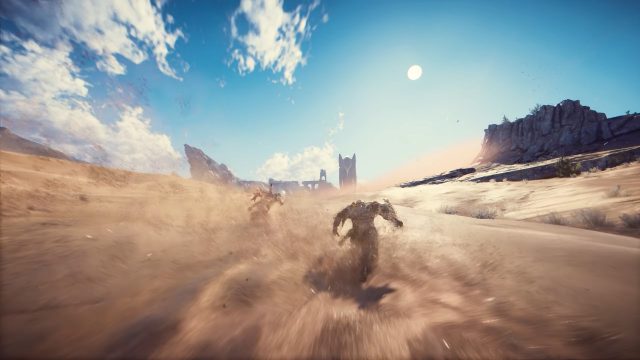 However, Atlas Fallen’s Steam page mentions that players will be able to “target and collect the essence of your enemies”. This will likely lead to customization that we got from salvaging enemy parts from The Surge. 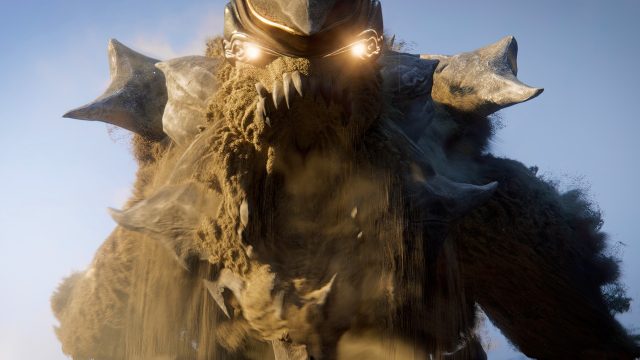 Perhaps sand blasts and flashes of lightning magic will give us the power we’ve come to expect from this studio’s game. There also appears to be a “GET OVER HERE!” ability that will draw even the biggest beasts towards your character, setting them up for a world of pain.

Not a fan of sand

Atlas Fallen is currently only available for pre-order on the main Focus Interactive site. The base game costs $59.99, as expected. It also appears that the only edition currently available is the physical disc version. No collector’s, digital or deluxe editions have been announced yet.

15 years later, the most audacious video game ever has stopped